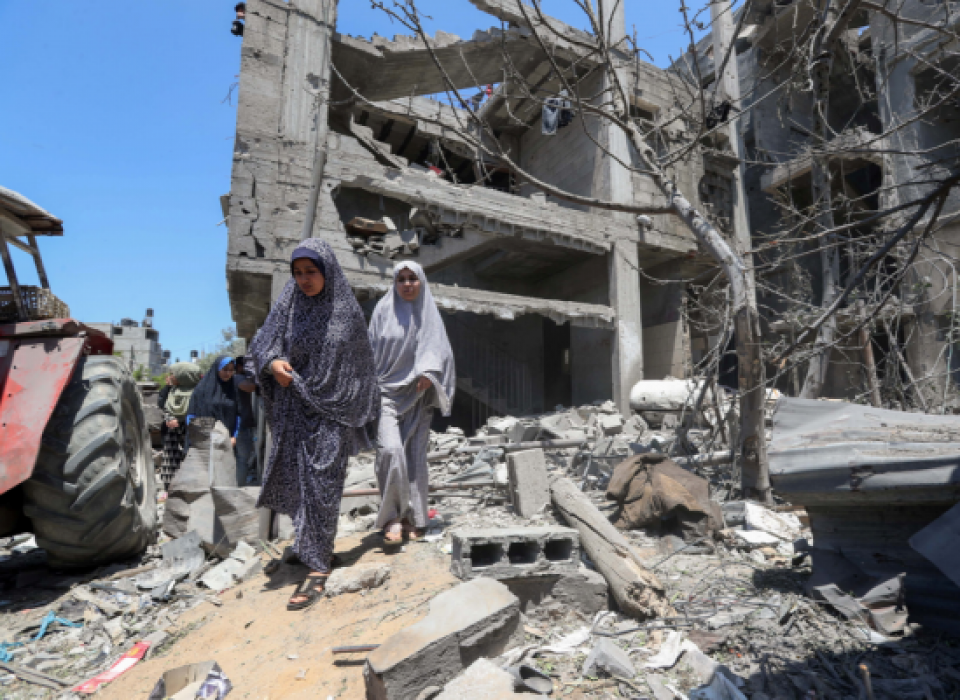 Palestinian women walk at the site of destroyed houses in the aftermath of Israeli air and artillery strikes in the northern Gaza Strip on May 14, 2021. REUTERS/Mohammed Salem

Until recently, this spring had been a time of religious celebration in Israel and Palestine. Last month Jewish Israelis finished observing Passover just as Palestinian Protestants and Catholics celebrated Easter, followed later by Orthodox Christian Easter celebrations in early May. Muslims’ month-long Ramadan fast has been underway, and both Western and Orthodox Christians are in Eastertide, the period of remembering the paschal promises of forgiveness, reconciliation, and hope.

But these celebrations in Jerusalem were interrupted when attempts to evict several Palestinian families from the Sheikh Jarrah neighborhood escalated into violence. In early May, the Jerusalem District Court decided to displace several Palestinian families and turn their homes over to Israeli settlers, the conclusion to a decades-long legal battle. Palestinian residents of Jerusalem and solidarity activists protested. On May 7, Israeli police confronted Muslims worshipping at Al-Aqsa Mosque during the holy month of Ramadan; Palestinians threw rocks, and Israeli police fired rubber bullets and stun grenades. These confrontations at Al-Aqsa continued on May 10, during Jerusalem Day events. As tensions escalated, Hamas fired rockets into Israel and the Israeli military bombed Gaza.

By May 14, reports indicated that at least 122 Palestinians, including 31 minors, had been killed and more than 900 wounded since May 10. In Israel, at least seven people were killed, including one child. While the immediate violence must be brought to an end, the realities of the ongoing Israeli occupation of Palestine cannot be ignored.

We both lead Christian organizations with deep connections to Palestine and Israel. Joyce is Palestinian and lived most of her life in Ramallah under Israeli occupation. She now lives in the U.S., where she leads the American Friends Service Committee. Mae is the executive director of Churches for Middle East Peace and previously lived in Jerusalem. She has spent decades working with both Palestinians and Israelis. As violence escalates, it is our belief that violence will only truly end when the root causes of injustice are addressed.

Jerusalem is a city divided. Since 1967, Palestinians have been denied full access to worship in the city; this year, as Ramadan began, Israel added new restrictions in Palestinian neighborhoods that limited movement and freedoms, including their ability to celebrate at holy sites like the Al-Aqsa Mosque.

During Holy Week, Jerusalem is central to worship for Palestinian Christians, with people gathering in the city for Palm Sunday, Good Friday, and Easter Sunday worship. Witnessing the holy fire pass from person to person, starting at the tomb in the Church of the Holy Sepulchre and eventually spread around the world remains a favorite tradition and represents the light of Christ’s resurrection and message.

As a foreign visitor to Jerusalem, Mae has been able to fully participate in these acts of worship and celebration. But Joyce — who was born in Jerusalem and whose home in Ramallah is located less than 30 minutes' drive from the Old City — cannot worship in Jerusalem without special permits from the Israeli military.

Palestinians in Jerusalem have also regularly faced the prospect of being displaced from their homes.

Like most Palestinians, Joyce’s family story was intimately impacted by the Israeli occupation. Joyce’s family was forced out of their Jerusalem home in 1948 and didn’t find a permanent home for three years. Her mother, who lives in Ramallah, recounts childhood memories but has no photos to share as a result of her history of displacement and dispossession. With Israel blocking all West Bank Palestinians from entering Jerusalem, Joyce’s mother cannot accompany Joyce on visits to her childhood home. Jerusalem’s Old City is only 10 miles from Ramallah but the gap that exists between the two places cannot be bridged.

And the displacement continues. Though the decision by Jerusalem's District Court was appealed to the Israeli Supreme Court, the high court has delayed issuing a ruling due to the ongoing violence; unless these delays become permanent, within the next two weeks 169 Palestinians, including 46 children, who live in the Sheikh Jarrah neighborhood of Jerusalem will be displaced from their homes by Israeli military and police. Their homes will be turned over to Jewish Israeli settlers. The Jerusalem municipality also plans to destroy 100 Palestinian-owned buildings, which are home to more than 1,500 Palestinians, to build a biblical theme park in the Al-Bustan neighborhood.

These actions are part of an overall increase in home demolitions this year. According to the United Nations Office for the Coordination of Humanitarian Affairs, as of May 10, Israel has destroyed 322 Palestinian-owned structures and displaced 468 people in 2021, even as COVID-19 infection rates surged in the West Bank and Gaza.

Mae has sat with families as they face impending demolition of their homes, listening as they serve tea. They describe feeling powerless as the U.S. government turns its back on the continued displacement of Palestinians in the West Bank and the movement restrictions that limit life for Palestinians. We must no longer ignore their cries for justice, peace, and security.

What might peace truly look like for all people in Israel and Palestine? An end to the current escalations of violence is only the beginning. Ongoing human rights abuses that have occurred for decades can no longer be ignored; these include, but are not limited to, the forced displacement of Palestinians from their homes and the expansion of the illegal Israeli settlement enterprise. The ongoing military occupation of Gaza and the West Bank, including East Jerusalem, must completely be brought to an end. By ending violations of rights and addressing historic injustices, true equality between people can be built so that the legitimate needs of both Israelis and Palestinians to live in peace and security are realized.

One positive step toward change is H.R. 2590, the Defending the Human Rights of Palestinian Children and Families Living Under Israeli Military Occupation Act, which was introduced by Rep. Betty McCollum (D-Minn.) in April. This act demands that the U.S. take action to ensure that none of the funding it gives to Israel is used to support the forced displacement of Palestinians.

Christians and people of all faith traditions need to take on a more prominent role in calling for a just and lasting peace that is built on realizing equality for Palestinians and ending human rights abuses. This is the path to a more secure and peaceful future for Israelis as well. For those of us in the U.S., we can ask our elected officials to support H.R. 2590. Members of Congress need to hear from people of faith who object to U.S. funds being used for these immoral policies.

We hope that all people will live into the messages of love, mercy, and peace that our various faith traditions share. This can be done by listening to Palestinians — people who do not have political or military power — as they share their stories and experiences and boldly standing for principles of justice by speaking truth when those principles are not realized. It is time to say enough to forced displacement, occupation, suffering, and injustice. It is time to build a world where love, hope, and reconciliation are realities. 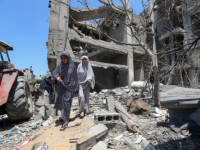