Ohrid, Macedonia, 14 March 2022 | Coincidental? Serendipitous? Timing can't be more opportune. First, the name Vladimir in Russian is the same as Volodymyr in Ukrainian. Yes, I'm referring to Vladimir Putin and Volodymyr Zelenski. Vladimir or Volodymyr Putin is President of the Russian Federation, the largest country on earth, covering 6.6 million square miles with 11 time zones, a 6,000-mile length, and a population of about 141.7 million,including over 100 ethnic groups. Volodymyr or Vladimir Zelenski is President of Ukraine, a much smaller sovereignty with less than 44 million inhabitants, many of whom are Russian.

So what? That's what is so exciting. The name Vladimir / Volodymyr means "ruler of peace." Both Vladimir and Volodymyr – rulers of peace – have their work cut out for them.

The Balkan region is unique. Here, East meets West. Last night at a friend's house, I saw the news from Russia (RT), the US (Fox, CNN, MSNBC), and Eurovision. It's also the first time in years that I've watched the news on any TV. In the Netherlands, RT is blocked as it is in most of the Free World. Much of what Russia is saying is viewed in the Free World as propaganda, as though there is none anywhere else.

In exchange for anonymity, I got some juicy responses to my questions here in Ohrid, Macedonia.

To be continued below but first, His Holiness Saint Pope John Paul II:

Astana, Kazakhstan, 23 September 2001 | I would like to assure you that I will never forget you in my heart. In prayer, every day, I entrust to the goodness of God, you, and the entire Church of Kazakhstan. Today I thank him for you.He has continuously granted you the power of the Holy Spirit through which you have preserved your ancestors' faith, despite your trials and persecution.

You will benefit your country by remaining faithful to it and participating in its political and social life. As Christians, you must try to give your society a face. What Jesus said to his disciples also applies to you:

From this city, from Kazakhstan, a country that is an example of harmony between men and women of different origins and beliefs, I wish to make an earnest call to everyone, Christians and the followers of other religions, to work together to build a world without violence, a world that loves life and grows in justice and solidarity.

We must not let what has happened lead to deepening divisions.Religion must never be used as a reason for conflict.

From this place, I invite both Christians and Muslims to raise an intense prayer to the One, Almighty God whose children we all are, that the supreme good of peace may reign in the world.

May people everywhere, strengthened by divine wisdom, work for a civilization of love, in which there is no room for hatred, discrimination, or violence.

I beg God to keep the world in peace with all my heart. Amen.

In war, it takes many to tango; in peace, even more. The talk on the street here in Ohrid, Macedonia, is a critique of NATO. Just about all I've met express profound disappointment and disillusionment. "Couldn't one leader in the EU or the US outsmart Putin to foresee and forestall prospective atrocities and crimes against humanity," they say. "Do the leaders of the Free World believe that supplying weapons of mass destruction to a tiny country with a pocket-sized military will save lives and win the war against a country with a war machine that rivals that of the United States?

"A proxy war between East and West, using the Ukrainians as either human shields or cannon fodder, defeats itself."

"This strategy is ruthlessly brutal, cold-blooded, vicious, and inhumane.

"Who will win? Who will lose? What is the outcome?"

For many here in Ohrid, Macedonia, the answer is almost obvious. "NO ONE!"

So why war? Is it about the US versus Russia?

"The Russians and the Americans are being pitted against each other by the EU, the most powerful economy globally, bigger, and more significant than the economies of China and the US COMBINED."

"It's about money and might – oil and gas – not about democracy."

"Putin is invincible compared to the former Shah of Iran or Sadam or Gaddafi."

"For Putin, NATO is too close for comfort. Didn't Kennedy respond similarly to Khrushchev when he almost transplanted a nuclear arsenal near the shores of Florida in Cuba? Would the United States allow Mexico or Canada, two neighboring countries, to sign a NATO-like pact with China, Russia, or both?"

We're in a world where one with one nuclear bomb is as lethal as one with thousands. The Corona Pandemic is now being upstaged with a war between the Free World against Mother Russia,the former Soviet Empire with Ukraine, smack at center stage. The people I meet here in Ohrid disdain the propaganda perpetrated from all sides.

"If all truly care about the Ukrainians – they're called their brothers and sisters – the Free World and Russia should cease from furthering the bloodshed, carnage, and human suffering and converge toward a bloodless solution."

Who entrapped whom? Has Putin or the Free World set the trap?

My friends in Ohrid unanimously speculate that NATO has dug a grave for Putin but fell into it themselves. Most people on this side of complexity are pro-Ukraine, Pro-Putin, and anti-NATO. Recently, and off-and-on for thousands of years, they've been on the same boat that the Ukrainians are now trying to navigate to safety. The sanctions help Putin's standing with his people. It's only a question of time before Biden as leader of the Free World, will have to broker peace in concert with the EU leadership with their tails in between their legs. No one, not even the most powerful economies on earth, can beat an enemy with one nuclear bomb, let alone 1000's.

So what's the anticipated outcome discussed here in the many street cafes — there are two cafes on every street corner in the area of town where we live. "All sides will gain and lose something at the expense of the 'collateral damage,' people dying for nothing."

My local barber said it all in three words when I asked him to compare Biden versus Putin: "I want peace." He had no further comment on the subject.

Earlier today, while gorging on Pizza (and the Pizza here tastes even better than in New York), my friend says, "Abraham, do you know the meaning of Vladimir, and do you know that the name Vladimir in Russian is the same as Volodymyr in Ukrainian?"

My friend says: "I honestly believe both Vladimirs or Volodymyrs should get a crack at working toward peace. Forget Biden and the EU leadership. They're not worth their salt."

My only source in the Kremlin, a young man, working in the Presidential Affairs Office on Red Square, has said not too long ago, "President Putin has everything. He's been in power for 17 years (at the time of our conversation). His only wish is that East and West meet and become one."

Are we witnessing a clash or a crash (misunderstanding) of civilizations? We are no longer in Stalin's Russia or Roosevelt's America. The world has changed whether we like it, want it, or not. Under Putin, Russia has become more democratic; the Free World, less. Will either ever become perfectly democratic? 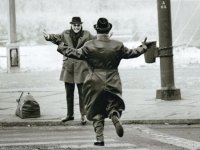