Palestinian Flags Aren’t Illegal in Israel. They Still Get Torn Down.

Israeli police, lawmakers and settlers are increasingly targeting the flag, which Palestinians say is a broader attack on their identity. 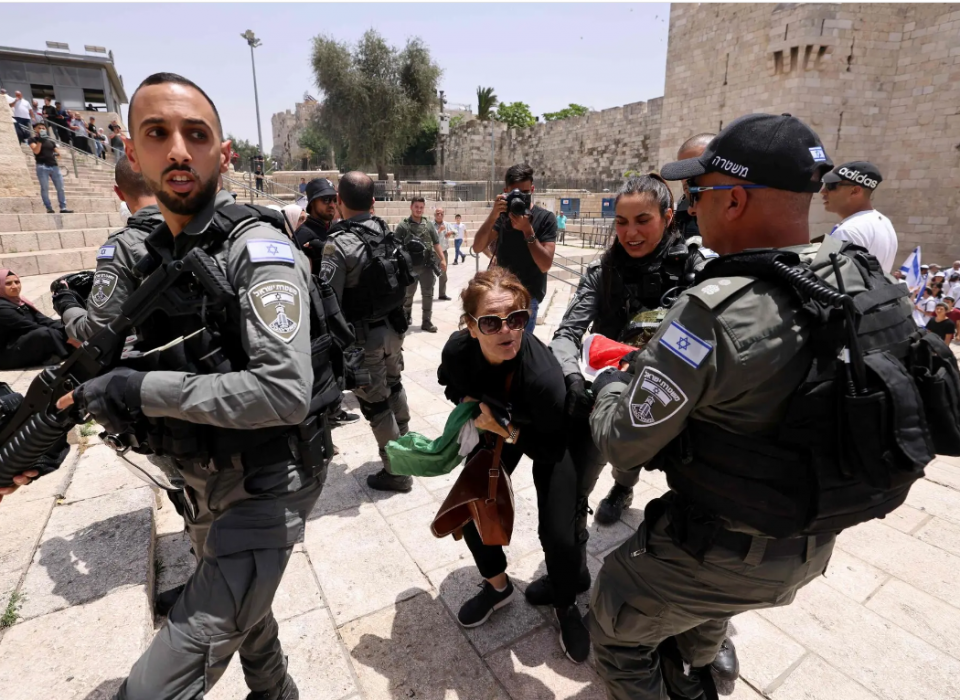 Israeli soldiers scuffling with a woman trying to raise a Palestinian flag in Jerusalem in May.Credit...Ahmad Gharabli/Agence France-Presse — Getty Images

"The Palestinian flag is not banned in Israel but its public display has come under increasing attack by Israeli authorities seeking to crack down on expressions of Palestinian nationalism. That is especially the case in East Jerusalem, the half of the city populated mostly by Palestinians."

JERUSALEM — Amid a sea of Israeli flags at the entrance to the Muslim Quarter of Jerusalem’s Old City, Abdullah al-Hajj walked toward a group of far-right Jewish marchers, some of them yelling racist chants, and raised the Palestinian flag above his head.

He knew he only had a few seconds.

With cheers from supporters and jeers from the Jewish marchers erupting around him, Mr. al-Hajj, 61, was quickly seized by three paramilitary police officers who wrestled the flag from his hands and carried him away.

“After I raised the flag I didn’t care what happened to me, if I got killed, had my bones broken or if I was arrested,” said Mr. al-Hajj at his home in Jericho in the Israeli-occupied West Bank, recounting how he confronted the far-right rally in late May. “It was important to me to show that this land belongs to Palestinians.”

The Palestinian flag is not banned in Israel but its public display has come under increasing attack by Israeli authorities seeking to crack down on expressions of Palestinian nationalism. That is especially the case in East Jerusalem, the half of the city populated mostly by Palestinians.

When President Biden visited this month, American flags were hung across Jerusalem for days, including along the edges of East Jerusalem. But most Palestinian flags raised there are taken down by the authorities within a matter of hours. 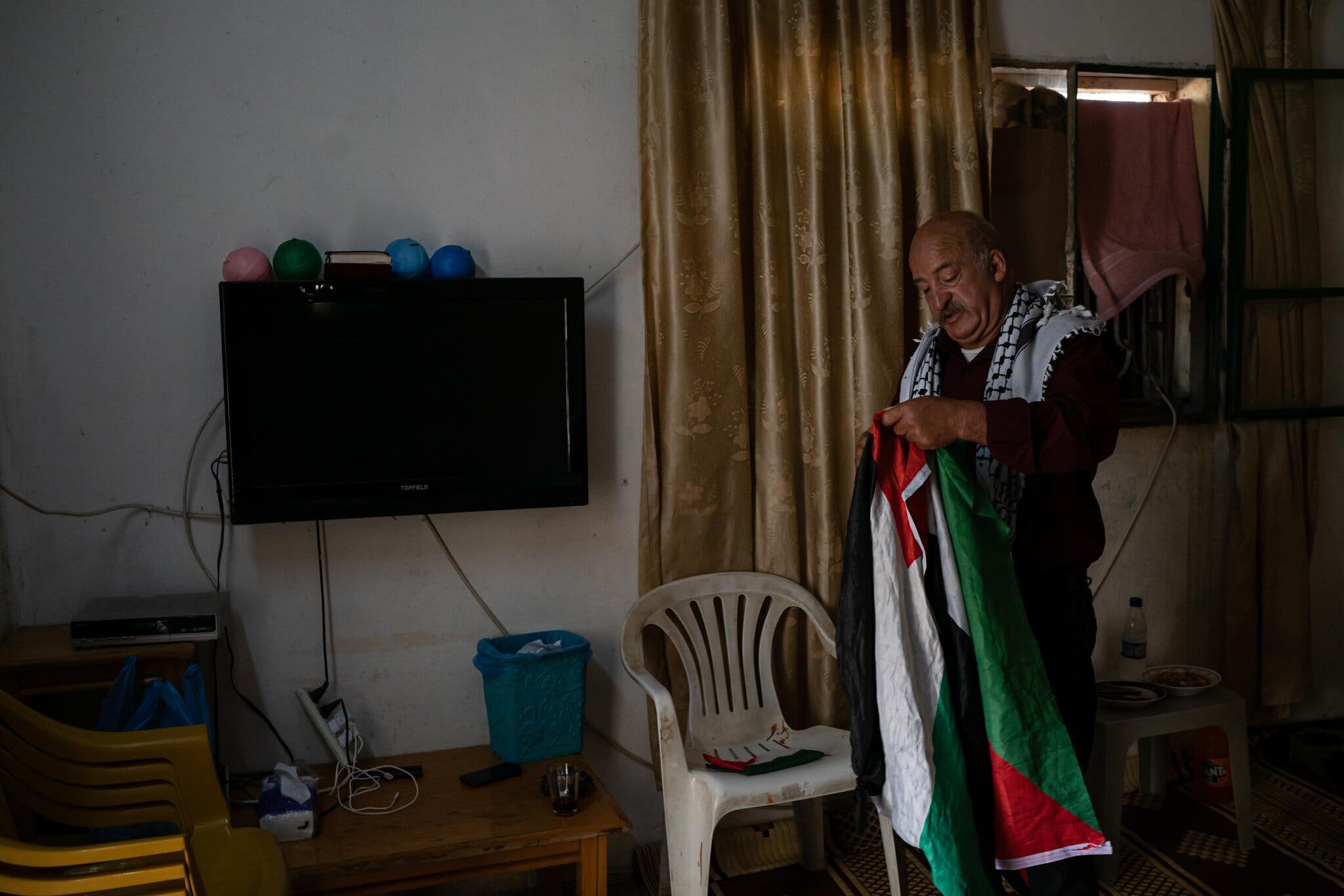 “After I raised the flag I didn’t care what happened to me, if I got killed, had my bones broken or if I was arrested,” said Abdullah al-Hajj at his home in Jericho in the Israeli-occupied West Bank.Credit...Samar Hazboun for The New York Times

In the Israeli Parliament, the Knesset, a bill that would ban the flag at university campuses passed preliminary approval last month, although its fate appears unclear after the government collapsed. And in the Israeli-occupied West Bank, emboldened Jewish settlers are removing Palestinian flags displayed inside Palestinian towns, sometimes with the protection of the Israeli Army.

East Jerusalem was captured by Israel in 1967 and later annexed as part of its capital, but most of the world still regards it as occupied territory. The Palestinian flag is practically absent in the streets, while the blue and white Israeli flag hangs from streetlights and the homes of Jewish settlers. Palestinian residents, unable to erect their flag at their homes, sometimes resort to painting murals in its black, white, green and red colors.

“What’s happening today is there is a movement within the Knesset and beyond to focus on the flag as an expression of terrorism or support for terrorism,” said Fady Khoury, a civil rights lawyer at Adalah, a Palestinian legal rights group. “It is part of an ongoing attempt to criminalize certain aspects of the collective Palestinian identity.”

The Palestinian flag has never been banned explicitly, but under Israeli law it is illegal to raise the flag of any group the state considers a terrorist organization. Before the signing of the Oslo Accords in the 1990s that included the Palestine Liberation Organization, or P.L.O., and by extension the Palestinian flag was banned. 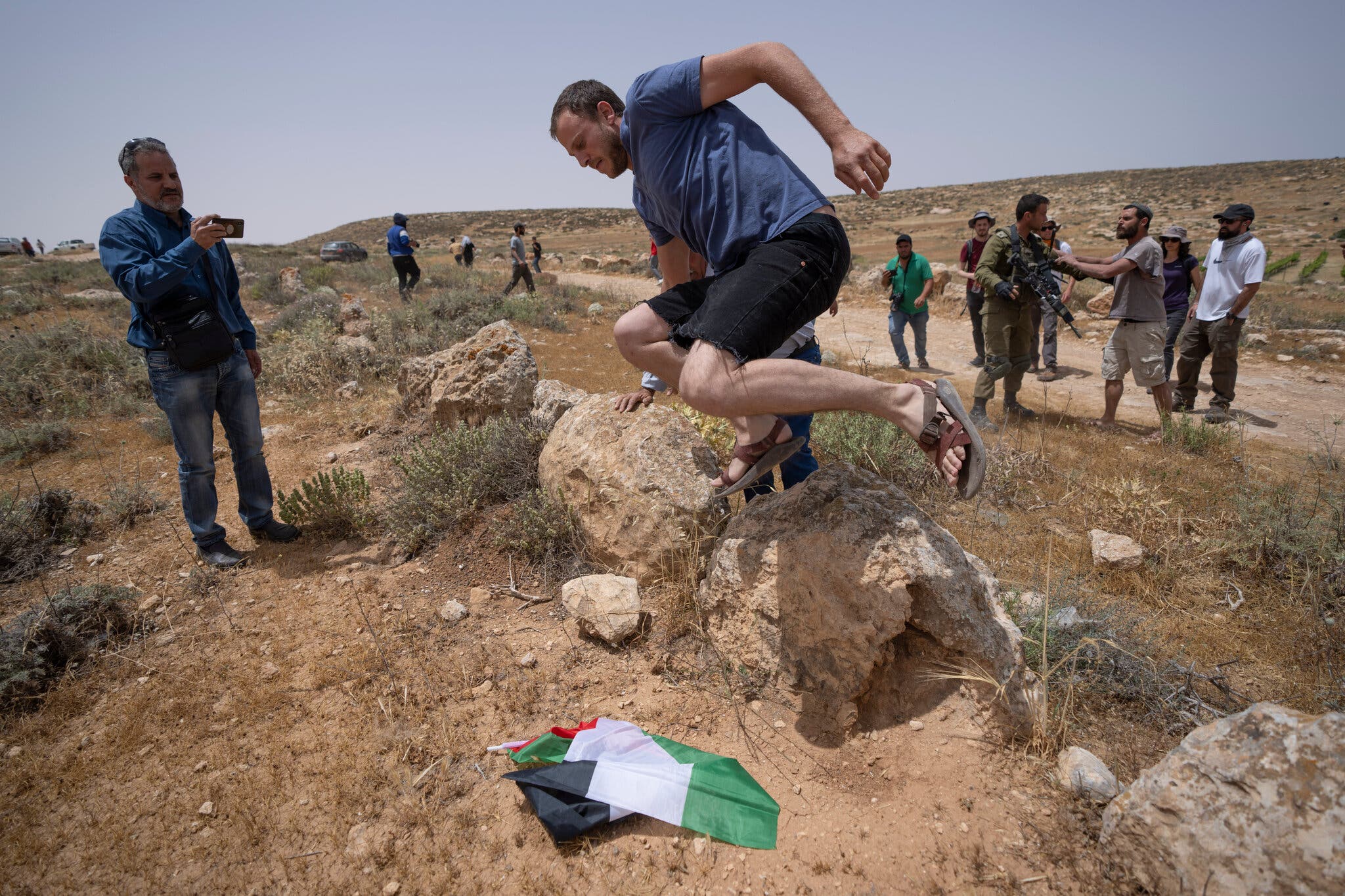 An Israeli settler jumping on a Palestinian flag that he took from a protester near a Jewish settlement in the West Bank in May.Credit...Nasser Nasser/Associated Press

That changed in 1993 when Israel recognized the P.L.O. as the representative of the Palestinian people and the flag began appearing across East Jerusalem and the West Bank.

But when the second Palestinian intifada broke out in 2000, Israel’s suppression of the uprising included a crackdown on expressions of Palestinian identity, among them the flag.

Since then, in the absence of a law banning the flag, Israeli police have used other ordinances, including public disorder laws, to arrest and charge Palestinians who raise the banner, lawyers and rights groups said.

“The way it has been justified, especially the arrests, has been by associating the waving of the flag with disorderly conduct — which is a separate offense,” Mr. Khoury said. “There is no explicit clause in any legal document that criminalizes the waving of the flag — but it’s been deemed a crime by individual police officers on the grounds it’s disorderly conduct.”

The Israeli police, asked about the confiscation of Mr. al-Hajj’s flag in May as well as other confrontations that day between officers and Palestinian protesters, said in a statement: “The act of hoisting does not constitute an offense.” But when the act endangers human life, it added, “the commander in charge in the field has the authority to take all necessary actions to stop the threat and maintain public order.”

Israel’s own courts, though, have regularly thrown out cases directly linked to the waving of the flag. 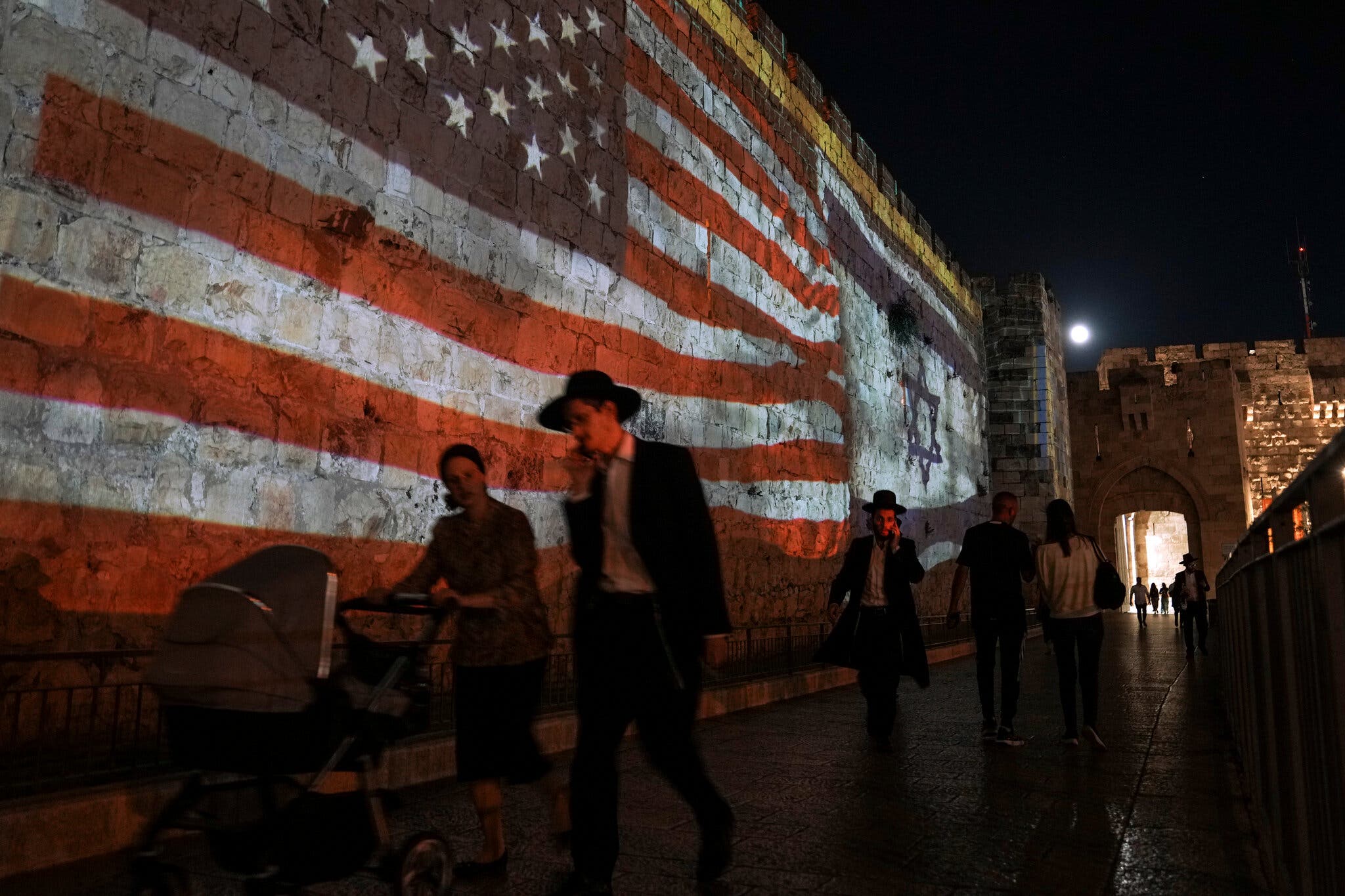 The American and Israeli flags were projected on the walls of Jerusalem’s Old City in honor of President Biden’s visit in mid-July.Credit...Mahmoud Illean/Associated Press

In September, a judge in Jerusalem ruled that a protester arrested for waving the Palestinian flag should be released from detention, adding that the police did not explain how it disrupted public order and safety.

Earlier this year a member of the right-wing Likud party proposed a bill that would prohibit the waving of the flag of an enemy state or the Palestinian Authority at state-funded institutions, namely colleges and universities. Those found guilty would be sentenced to a year in prison and fined no less than 10,000 shekels, about $3,000.

The bill gathered support in the Knesset after students at Ben Gurion University were permitted to mark Nakba Day, commemorating the flight and expulsion of hundreds of thousands of Palestinians when Israel was created in 1948, with a Palestinian flag demonstration, angering some Israelis.

The bill received preliminary approval but after the collapse of Israel’s Parliament last month, it would need to be reintroduced by a new government.

After Mr. al-Hajj’s display of Palestinian nationalism was cut short in May, he was carried to a nearby police guard tower by four officers and later released. 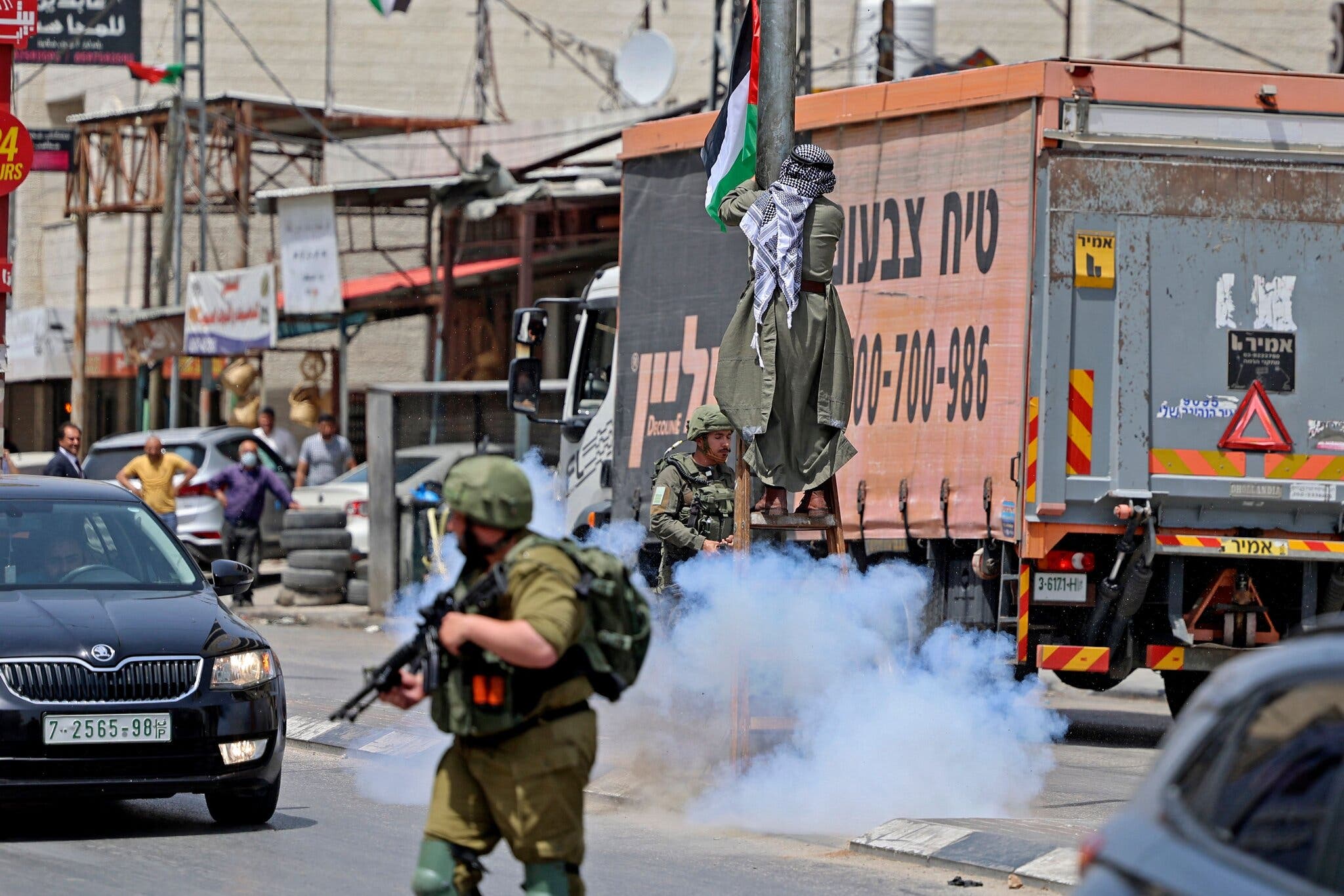 Hanging a Palestinian flag in Huwara, in the West Bank. The Israeli police are said to have used ordinances such as public disorder laws to arrest and charge Palestinians who raise the banner.Credit...Jaafar Ashtiyeh/Agence France-Presse — Getty Images

A few blocks away, where dozens of Palestinians had gathered for a counterprotest to the right-wing Jewish rally, police officers charged at a group of people waving Palestinian flags, and fired smoke grenades at them, according to video from the scene.

Battles over the flag are also being fought in Palestinian areas like the West Bank.

In the Palestinian town of Huwarra that fight has become a near-daily occurrence, said the mayor, Nasir Huwari. An Israeli settler driving through the town was recently videotaped climbing an electrical pole and ripping down a small Palestinian flag. 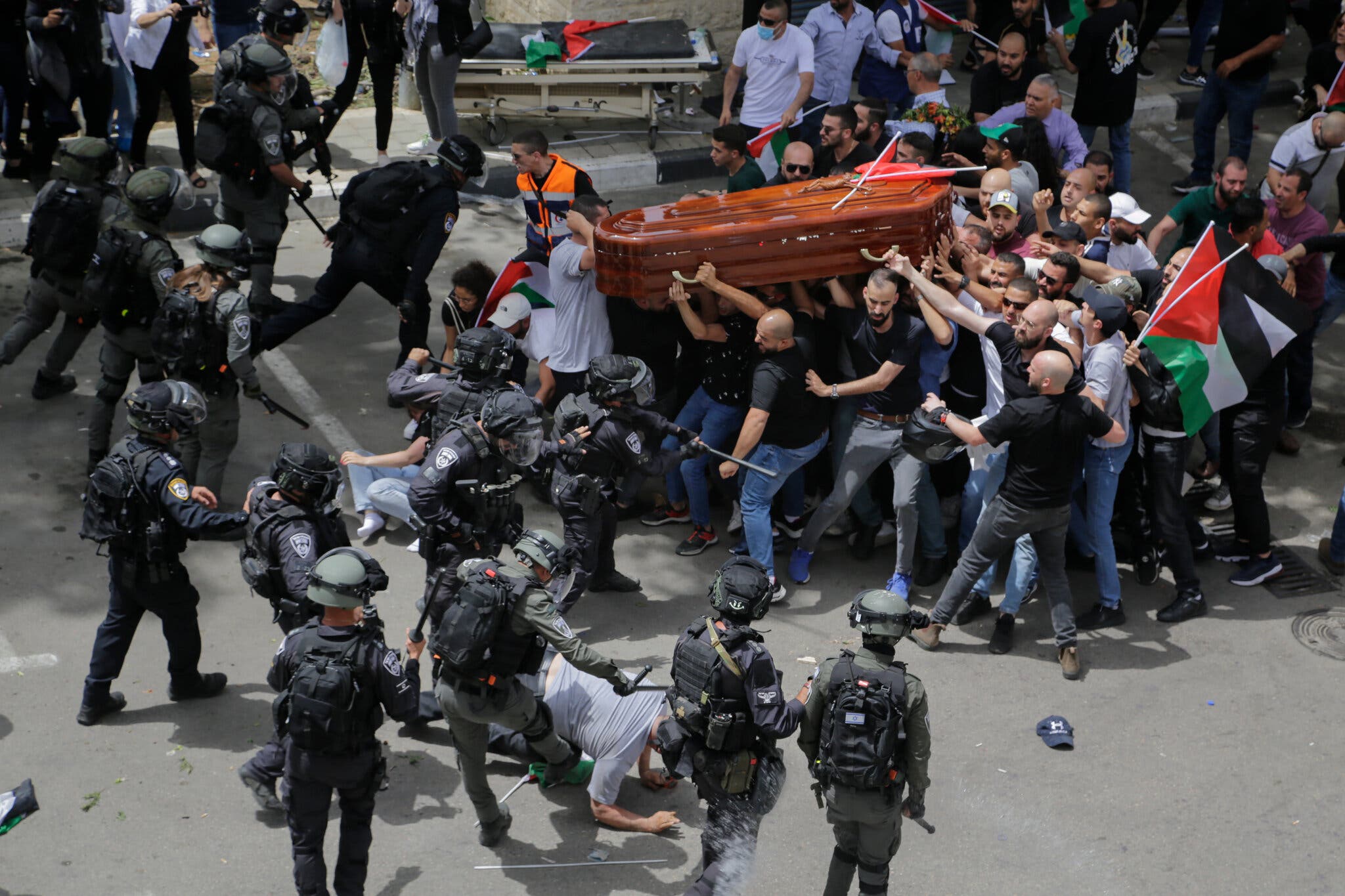 Israeli police officers attacked mourners who were carrying the coffin of the Palestinian American journalist Shireen Abu Akleh and waving the Palestinian flag in May. Credit...Maya Levin/Associated Press

Now settlers come regularly to remove flags in Huwarra, often under the protection of the Israeli military, Mr. Huwari said. There has also been a rise in violence from the settlers, who have attacked local shops, he said.

“Palestinians are living day and night under the Israeli flag,” he said. “So why do they want to remove my flag and this is an area under the Palestinian Authority? They are trying to incite.”

In response to a question regarding the settlers removing the flags, a spokeswoman for the Israeli military said it was the responsibility of the Israeli police to enforce the law when crimes or offenses are committed by Israeli citizens.

The Israeli police said in a statement that if suspects are involved in an offense “their further investigation will be conducted by the police, accordingly.” It did not say whether it had investigated any recent incidents of settlers tearing down Palestinian flags.

Two weeks before the rally, the world witnessed shocking scenes at the funeral of the Palestinian American journalist Shireen Abu Akleh, who was killed while covering violence between Israeli troops and Palestinian men, most likely by an Israeli bullet.

Israeli police attacked mourners carrying her coffin and waving the Palestinian flag. One video showed a police officer snatching small flags and throwing them to the ground. 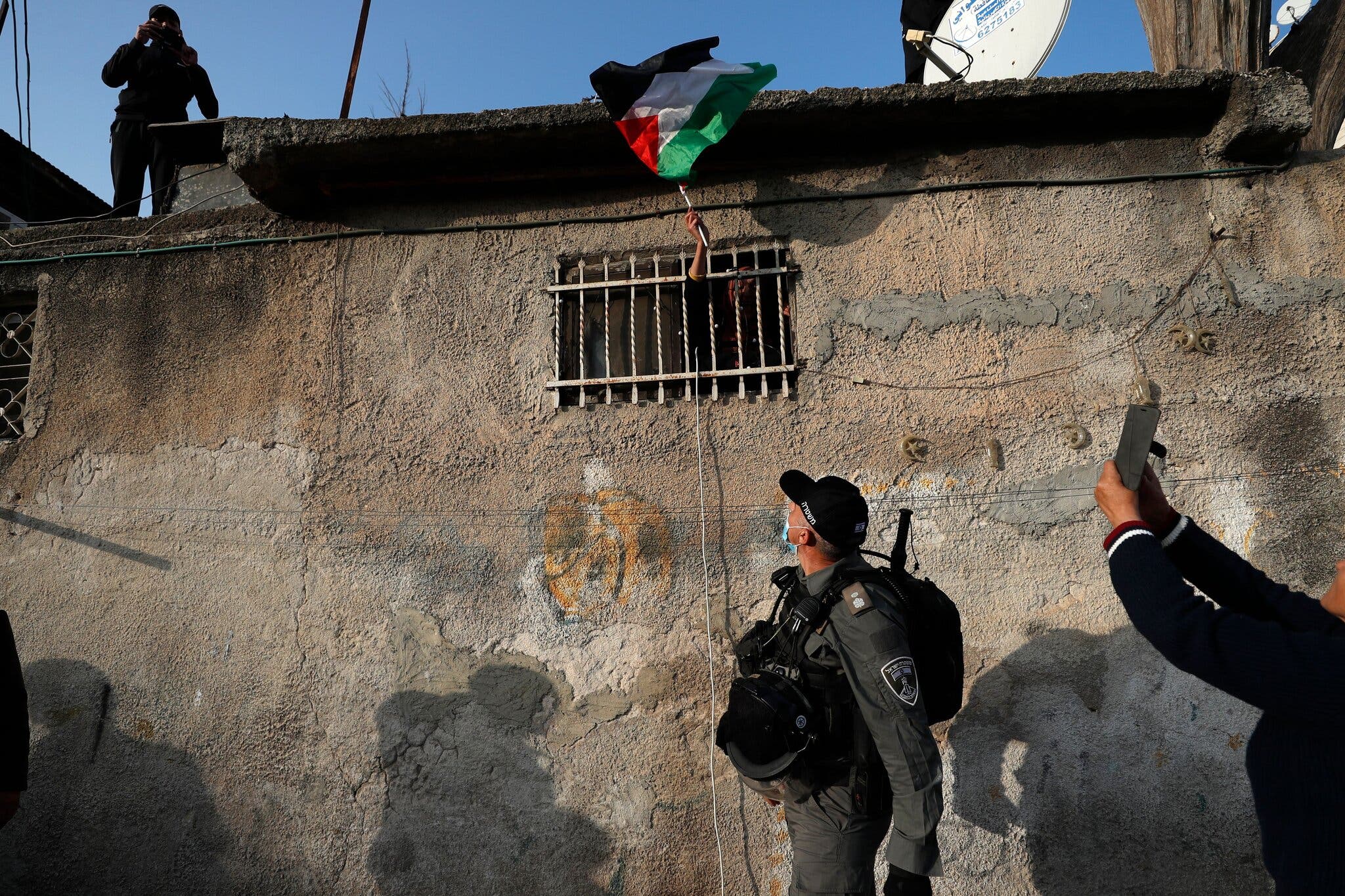 A woman waving a Palestinian flag from her window in the Sheikh Jarrah neighborhood in East Jerusalem in February.Credit...Atef Safadi/EPA, via Shutterstock

Ms. Abu Akleh’s brother, Tony, said the police had told him before the funeral that they did not want the flag to be raised or mourners to chant nationalistic slogans.

“As much as they tried to remove the flag, the flag remained raised,” Mr. Abu Akleh said of the violent events at his sister’s funeral. “I don’t think people came to the funeral just to raise the flag, but Shireen is first and foremost a Palestinian.”

Even in the hours after Ms. Abu Akleh was killed, the police took issue with the flag being raised in her honor. As mourners streamed into the family’s home in northern Jerusalem, officers demanded that a small Palestinian flag flying atop the two-story building be removed, Mr. Abu Akleh said. The family refused.

Weeks later, the flag still flapped in the wind. 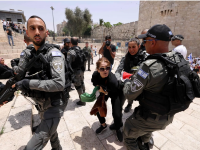