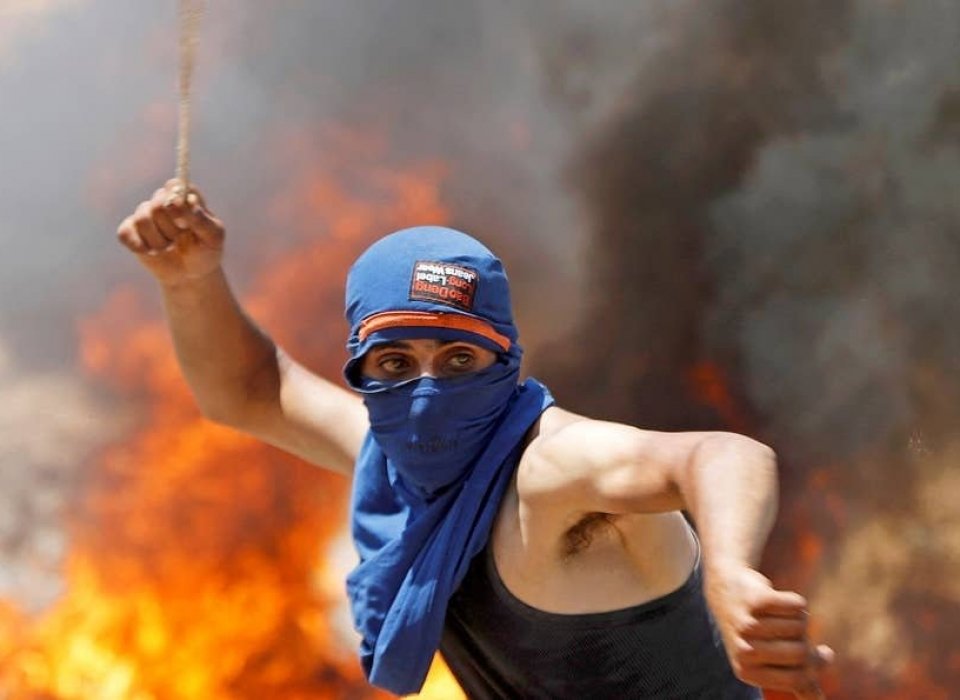 A Palestinian demonstrator uses a sling to hurl stones at Israeli troops during a protest near Ramallah, on August 8, 2020.Credit: Mohamad Torokman / Reuters

The only thing standing between Israel and the Palestinians reverting to using armed struggle to advance their goals is the current Palestinian leadership. This is the same Mahmoud Abbas-led leadership that U.S. President Donald Trump and successive Israeli governments have demonized, economically suffocated, and politically battered. If the U.S. and Israel do not make an about-face soon, Palestinians will care less who blames them when the bullets and missiles start flying in both directions.

While this perfect storm is brewing, the recent Israel-United Arab Emirates announcement of plans to normalize relations is a mere red herring. The announcement has been received by two extremes. On the one side, driven by Israel and the U.S., you have delusional people who have convinced themselves that another “breakthrough” has been made toward Israel gaining broader acceptance in the region. On the other side, where Palestinians lead the pack, this announcement is yet another blow to the struggle for freedom and independence from Israeli military occupation. Put in context, this entire diplomatic episode is merely a flicker on a crowded Middle East radar. The much brighter blimps on the radar screen are Egypt’s and Jordan’s normalization with Israel, which have been flashing red for decades.

Add to the UAE’s move all the rest of Israel’s actions on the ground against Palestinians, least of which is Israel’s threat of annexing more Palestinian lands, and the picture becomes clearer. While negotiating with the Palestinians for over two decades, Israel increased their illegal settler population from 100,000 to nearly 700,000, in addition to making it crystal clear that a Palestinian state of any size will not be permitted to emerge anywhere west of the Jordan River. In addition to the never-ending expansion of the settlement enterprise, the list of Israeli actions on the ground is far too long to list here, but it includes geographic fragmentation, the siege of Gaza, arrests, house demolitions, economic suffocation, usurping of olive trees, economic pillaging of Palestinian lands, water resources and stone, and marble quarries.

The missing part of the conversation is that Trump’s “Peace to Prosperity” vision, the Israel-UAE announcement, and Israel’s imminent annexation of more Palestinian lands, are taking Palestinians straight back to recalibrating the tools of their struggle, moving them one step closer to returning to all-out armed struggle.

Before the Israel-UAE announcement, the latest polling report of the Palestinian Center for Policy and Survey Research (23 June, 2020) indicates a disturbing trend in Palestinian society. More and more Palestinians see a return to armed struggle as the only way to stop Israel’s annexation plans, as well as the only means to end this 53-year-old military occupation.

When asked about Israeli annexation of Palestinian territories and its potential consequences, “52 percent support a return to armed struggle in a response to annexation.” The report also notes that “the public is divided on the best means of ending the Israeli occupation: 45 percent believe it is armed struggle, 24 percent think it is negotiation, and 22 percent think it is non-violent resistance.”

Polls are polls and should always be read with a grain of salt. However, add to the polls the sharp proliferation of weapons in the West Bank and the heavy armaments that have entered Gaza thanks to Israel’s hermetic seal of the Gaza Strip which opened up an entire black market through tunnels, we are left with a powder keg no less explosive than the blast that ripped apart a big chunk of Beirut. Public displays of this toxic reality can be seen daily in the streets of Gaza, Jenin, Nablus, Ramallah, and Hebron.

This rapid move toward using armed struggle cannot be attributed to Israel's actions or Washington’s blind support for this extremist Israeli government alone. Part of the blame must also fall on the Palestinian leadership. For decades, ever since the effective collapse of the peace process, the leadership, starting with Abbas himself, have all paid lip service to the need to engage in mass, non-violent mobilization against Israel’s military occupation, but have refused to take the lead. All levels of the Palestinian political agency sing of non-violent resistance, smart resistance as it is sometimes called, as being the effective way to levy a cost on our military occupier.  All this talk is packed in slogan-rich, loud, public rhetoric and, at best, articulated through a handful of orchestrated civil disobedience actions that were designed to be short-lived and with limited popular involvement. Add to that the refusal of the leadership to refresh its ranks, and you are left with an entire generation that aims to reciprocate Israel’s longstanding ‘might is right’ policy.

Let me be clear. I am absolutely convinced that there is no military solution to this conflict. Israel has proven it cannot win, despite its military power, and Palestinians have proven they cannot lose, despite their never-ending sacrifices. But not winning and not losing is not good enough.

Other key stakeholders, such as European and Arab countries, continue to refuse to hold Israel accountable; they refuse to use powerful tools at their disposal, from diplomatic isolation to economic sanctions, and military action. Instead of acting on their verbal condemnations of systematic and blatant Israeli war crimes, the European Union remains a leading trading partner for Israel and is a major supplier and customer in the Israeli arms industry. As for the Arab countries, their wealth is kept from their own citizens, so no one seriously expects them to leverage their resources for holding Israel accountable, especially as the UAE is revealing more than ever that these unrepresentative autocracies are under the influence of the U.S. for their very survival.

When all hell does break loose, non-violent people like me will be marginalized. My two daughters in Cambridge, Massachusetts – one a chemical engineer MIT-graduate and the other a Harvard junior studying neuroscience – will look back to their homeland on fire and be in no rush to return home. The business community with which I work in Palestine will shrink overnight, cutting losses wherever possible. All this and more will surely give Israel's extremist society and government much joy: Palestinians will be looking to leave Palestine. But I have a surprise for Israel and its U.S. master. Me, my family, and the private sector of which I am a part, are the minority in Palestine; of course, the Trump-Bibi duo know this very well, for it is they who brought us to the sad state we are in today.

The majority of Palestinians – and I include myself – will be right here. We are going nowhere. The only difference will be that we will have nothing more to lose. Israelis need to reflect on this deeply. Likewise, those Jewish Americans who are blind to Israel’s occupation should not be in such a rush to send Israeli sons and daughters into more harm’s way then they have already cheered them into.

Israeli citizens need to choose, and soon: military occupation forever or finally change paths and get the boot of occupation off Palestinians necks, so that we can breathe. Only a breathing neighbor can craft a common future together. Jews everywhere, more than anyone on this earth, should understand that lesson from history.

Sam Bahour (@SamBahour) is a Palestinian-American business consultant in Ramallah and a frequent commentator on Palestinian affairs from Ramallah/Al-Bireh in Occupied Palestine. He blogs at www.ePalestine.ps. 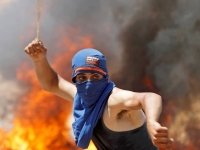