What are they waiting for? When will they serve the main entre, the most tasteful that the best of the best chefs can offer? The sweet aroma of peace is in the air, all around us. A clear majority on all sides of the Divide wants peace (Israeli Jews, 73.8%*; Israeli Arabs, 97%*; and the Palestinian Arabs, 85.7%*). This is affirmed by the Jerusalem-based Israel Democracy Institute and the Ramallah-based Palestinian Center for Policy and Survey Research (executive summary here, full survey here). Are they just stumbling over their own hurdles? Is a movement toward peace solely about real estate, jobs, position, or status? Or, should it be about humanity, community, and the public interest. When Dr. Martin Luther King talks about the mountaintop, he is talking about a higher level of consciousness, a movement that harmonizes the “I” with the “we” and the “we” with the “I.”

Do the people in Israel-Palestine have the moral courage to dare go beyond their ‘I’ sight to allow them to imagine a moral path with ‘we’ sight, reinforced with hindsight, insight and foresight (adapted from Civil Rights Icon Ms. Ruby Sales during an interview with Krista Tippett of OnBeing)? Can they, will they rid themselves of the hurdles, real or imagined? “Only 39% of Palestinians and 46% of Israelis support a peace agreement package [riddled with obstacles] that comprises: 1) a de-militarized Palestinian state [rejected by 80% Palestinians but supported by 61% Israelis], 2) an Israeli withdrawal to the Green Line with equal territorial exchange, [rejected by 56% Israelis; supported by 61% Palestinians] (3) a family unification in Israel of [ONLY] 100,000 Palestinian refugees [overwhelmingly rejected by both; not enough for the Palestinians, too many for the Israelis], 4) West Jerusalem as the capital of Israel and 5) East Jerusalem as the capital of Palestine, 6) the Jewish Quarter and the Western Wall under Israeli sovereignty and 7) the Muslim and Christian quarters and the al Haram al Sharif / Temple Mount under Palestinian sovereignty [all seemingly prayers without an end in sight], and 8) the end of the conflict [ironically supported by all, but impeded by all the stumbling blocks] and 9) all future claims against the other [supported by most Israelis, rejected by most Palestinians because they’re not going to let the Israelis get something for nothing and neither side will permit the other to get away with murder]”.

It is clear that the leadership should be sent back into the kitchen to concoct more palatable recipes. And, if any one of the leaders can’t stand up to the heat, tell them to get out of the kitchen. A leader who cannot hammer out an acceptable peace resolution is not worth his or her salt and should be (democratically) replaced. Of course, from my ivory tower it is easier said than done. But the leaders of the region must creatively combine the many regional contradictions to produce a well-balanced yet spicy feast.

The statistical indicators of The Palestinian-Israeli Pulse make that clear. “The level of threat on both sides regarding the aspirations of the other side in the long run is very high: 54% of Palestinians think that Israel’s goal is to extend its borders to cover all area between the Jordan River and the Mediterranean Sea and expel its Arab citizens. Some 27% [Palestinians] think Israel’s goal is to annex the West Bank while denying political rights to the Palestinians. Some 35% Israelis (40% Israeli Jews and 8% Israeli Arabs) think Palestinians’ main aspirations is to conquer the State of Israel and destroy much of its Jewish population; 19% [Israelis] think the goal of the Palestinians is to take over the entire state of Israel.

BOTTOM LINE, as extrapolated from the Pulse: most Israelis and Palestinians want to be safe from ‘terrorist’ attacks, especially perceived state terror. Most Palestinians worry more about jobs than about territory or borders. Most people on all sides want little more than for the other side to leave them alone. Before they are willing to break bread together, they would first want to put bread on their own tables to take care of their families and to raise their children.

And finally, the people of Israel/Palestine crave honor, respect and dignity from each other; a more pliable and palatable peace process with built-in degrees of expandability, flexibility and versatility; in short, fluidity predicated on ‘We’ Sight not just ‘I’ Sight. This will be the focus in the third and final part of this series: A EU Complement to the Arab Peace Initiative.

What matters most: they want PEACE.

Second of a three part series:  A EU Complement to the Arab Peace Initiative 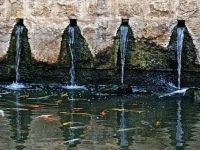