An outsider in my own community- Robert Cohen

‘The truth is simple, but unwelcome’ 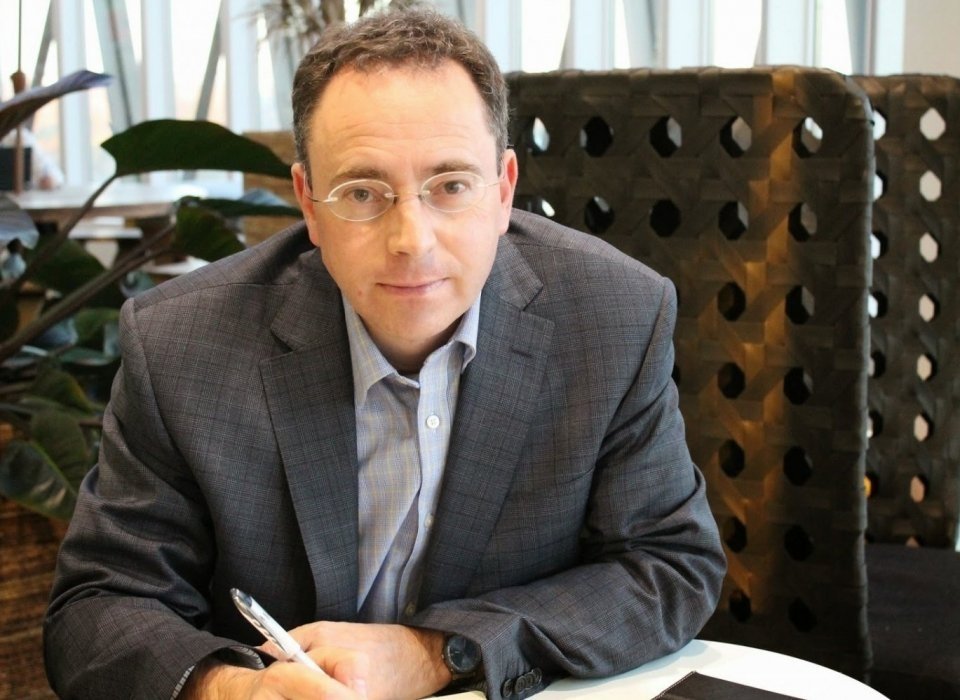 ROBERT COHEN is developing a reputation as one of the leading Jewish dissidents in Britain. He has been “writing from the edge”, as he puts it, since 2011, primarily about interfaith relations and Israel/Palestine, in a monthly blog, Micah’s Paradigm Shift. The reference is to Micah 6.8: “What does the Lord require of you? To act justly and to love mercy and to walk humbly with your God.”

So far, so uncontroversial. Many of the people whom he criticises implicitly, Christian and Jewish, would endorse that prophetic call. The conclusions that Cohen comes to, however, are sometimes very different from theirs. In particular, he is calling for Churches to commit to “costly solidarity” with the Palestinian people. Among his prescriptions is “refusing to allow your local Jewish communal leadership to set the boundaries of permissible debate on Israel”.

“Jewish-Christian dialogue is about to go through the wringer,” he warned, in a blog earlier this year. “Long-standing relationships with Jewish neighbours and clerical colleagues will deteriorate long before they can be rebuilt with new foundations. . . It means you will be branded Israel haters. You will be branded antisemitic.” 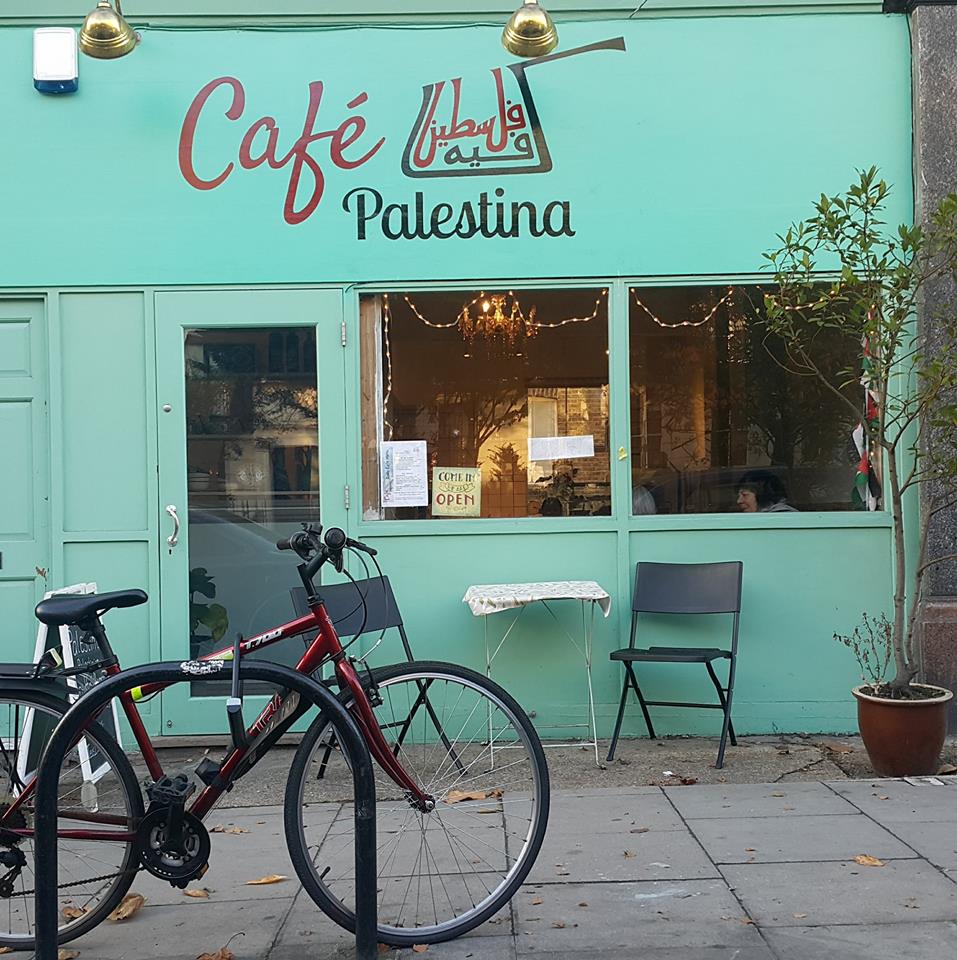 WHEN I meet him in north London, in the new Café Palestina in Kentish Town, we begin by discussing Jewish-Christian relations.

“The work of reconciliation since the Second World War, whether it’s high-end theological discussions or local communities’ getting to know each other on the ground, has revolutionised relations,” he says. “And it has been absolutely necessary — perhaps even more so for Christians than for Jews.”

Christians need to be reminded of the part that church teaching has played in the persecution of Jews over the past 2000 years, he says. “It’s almost impossible to understand the history of antisemitism without understanding the role of the Church; and Churches need to keep saying that, because it’s very easily forgotten.”

That shameful history makes it difficult for church leaders to challenge what is happening now in the Middle East, he says. “Zionism — and the state of Israel — has become so central to Jewish thinking and Jewish identity that it has merged into Judaism itself, right across the spectrum from Liberal to Orthodox. As a result, it is very hard to be critical of Israel, or critical of what was originally a 19th-century political ideology, without being accused of being antisemitic.”

No doubt, I suggest, that was why the Archbishop of Canterbury, addressing the Board of Deputies of British Jews in 2015, spoke of “religiously sponsored violence” by Christian, Muslim, Buddhist, and Hindu radicals, but made no mention of violence by Jews in the occupied West Bank. “There is a problem”, Cohen says, “when you take on too much responsibility for the history of Jewish oppression, that it prevents an honest, critical conversation about Israel. 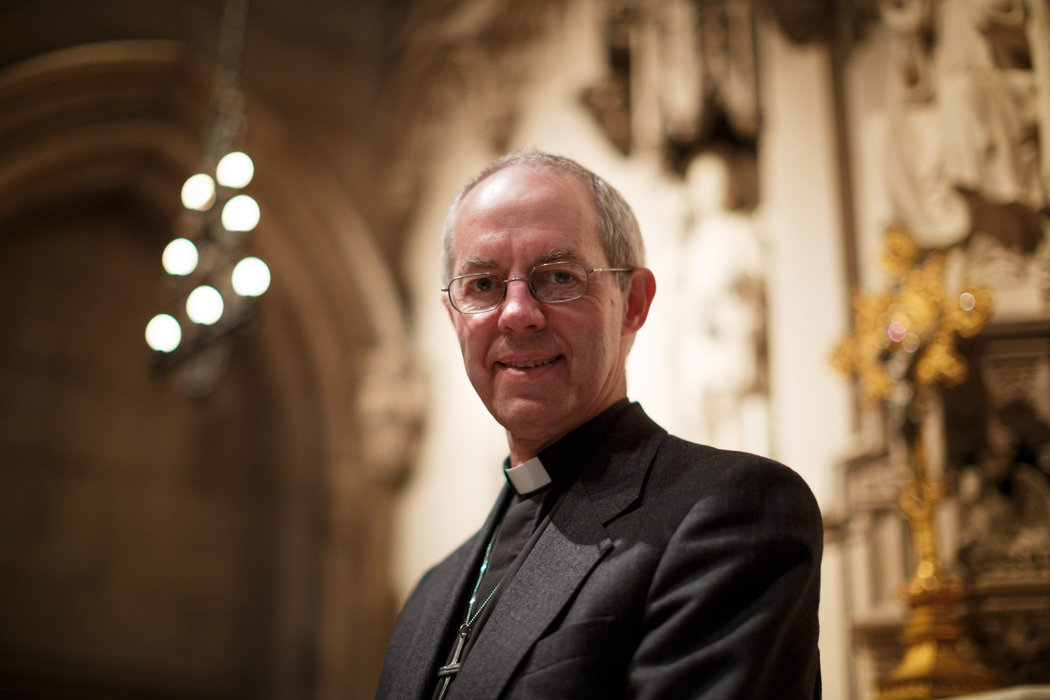 Justin Welby, Archbishop of Canterbury, attending a conference in Manhattan on inequality (but no mention of inequality enforced by Jews in Israel).

“Meanwhile, the leadership of the Jewish community wants to close down debate. But that conversation urgently needs to take place.”

IN JUNE this year, the National Coalition of Christian Organizations in Palestine wrote an open letter to the World Council of Churches, saying that, in East Jerusalem and the West Bank, “discrimination and inequality, military occupation and systematic oppression are the rule”. Quoting the call of Isaiah 1.17 to “seek justice [and] defend the oppressed”, it entreated the global Church to offer “costly solidarity” rather than “shallow diplomacy”.

Cohen’s own commitment to the cause of justice for Palestinians came by degrees, he says. His parents had grown up in the United Synagogue (“the mainstream movement of Jonathan Sacks and Ephraim Mirvis”), but had moved to the more liberal Reform movement when he was young. They were Zionists almost by default: “I don’t remember Israel being talked about very much at home. I didn’t know what happened to the Palestinian people in 1948 — I didn’t understand that there was an occupation.”

He spent about five months in Israel after leaving school, but still “had no idea about any of that” until 1987, his final year at Manchester University, when the First Intifada began. “I sat in the library when I was meant to be revising, and read all the articles I could find, in the New York Review of Books and Foreign Affairs, trying to find out who these Palestinians were. I suddenly realised that they were a people with a culture and a history that they were just as proud of as my people were of theirs.”

Later, the Greenbelt Festival helped to develop his thinking. It was here that he heard the American Jewish theologian Marc Ellis, and the Israeli historian Ilan Pappé. “Ellis’s book Towards a Jewish Theology of Liberation became a key text for me. He argues that the Jews are now no longer an oppressed people but an empowered people, and asks: What are we doing with that empowerment?” Cohen’s own conclusion is that, in Israel/Palestine, “we’re making a terrible hash of it.”

IT WAS after a trip organised by a small Christian NGO, the Amos Trust, to meet some Palestinians, that he began his blog.

During a trip to Israel-Palestine earlier this year (News, 5 May), the Archbishop of Canterbury described the situation as “complicated. . . Everything you say here has to be qualified with the comment ‘But it’s not as simple as that.’”

Cohen takes issue with this: “Certainly, it has a long history, and you could spend a lifetime reading books about it. But it’s much simpler than people want you to think. The fundamental issue is a massive power imbalance between the Israelis and the Palestinians.

“They aren’t two equal sides arguing over how to share a piece of land where they both feel they have national rights. The Palestinians aren’t occupying Israeli land, they aren’t denying Israelis freedom of movement, they aren’t controlling their water supplies, they aren’t arresting them in the middle of the night. Ultimately, it’s about who’s got power, and who hasn’t.”

THE Archbishop also referred to complexity in an interview with The Jewish News in 2013, in which he said that he regretted not voting against a General Synod motion that endorsed the Ecumenical Accompaniment Programme in Palestine and Israel (News, 28 March 2013). Later, at a dinner organised by the Board of Deputies of Britain’s Jews, he expressed regret about a tweet by the Revd Dr Stephen Sizer linking Israel to the 9/11 attacks in New York (News, 13 February 2015): he was sorry that it had happened, but went on: “We did seek to deal with it quickly and effectively” (News, 8 May 2015).

In a blog at the time, Cohen expressed his disappointment in Dr Sizer. The link was “deeply antisemitic”, and Dr Sizer “should have been smart enough to spot this immediately”. But “the work that he’s done in helping people to understand Christian Zionism has been incredibly valuable,” Cohen says, “and I find it frustrating that the Jewish community is happy to align itself with Christian Zionists — despite Christian Zionist theology, as far as I can see, being deeply antisemitic.

He agrees that antisemitism “exists within all elements of society generally”. Speaking about the Labour Party, he says: “Jeremy Corbyn’s real problem is not antisemitism, but Palestinian solidarity.” Cohen believes that there is “a deep concern within the Jewish establishment that, if Mr Corbyn became Prime Minister, that would fundamentally change British foreign policy towards Israel.

“He looks at it in a very different way, and therefore I think there has been a concerted effort to make the Labour Party look toxic on that issue, and to make Jeremy Corbyn look toxic, by having all this focus on antisemitism being ‘out of control’ in the Labour Party.”

HE SPEAKS quietly, without obvious heat, but his blogs, although carefully written and nuanced, do not pull any punches. Although he “wanted to have a conversation with other Jews”, he has found that that is easier said than done. “Those who do read me tend to be those secular, left-wing Jews who would agree with me, and perhaps like the fact that I have a slightly more Jewish spin on things than them. I don’t think I’ve made any inroads into the mainstream, though I can’t believe that I’m not on their radar. I am very much an outsider in my own community.” 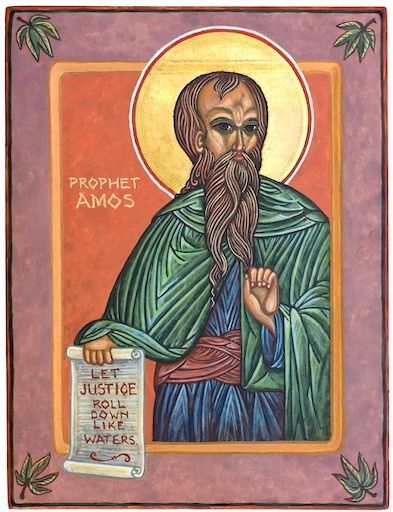 An image of the prophet Amos holding a scroll inscribed with ‘Let Justice roll down like waters’, Amos 5.24. (The King James version is less attractive: “But let judgment run down as waters, and righteousness as a mighty stream”)

The unpopularity of his standpoint is exacerbated by his own biography. One pro-Israel activist who reads his posts “and then wades in” calls him a Jino: a “Jew In Name Only”. Cohen says: “He tells me I don’t have the right to talk about Israel because I’ve married out, my children are Christian, and my wife is a vicar.” All of which is true, and was made public in his blog.

He and his wife, Anne, met as students at university, where he was reading politics and philosophy. They married 25 years ago, in a ceremony hosted by the Quakers, and based on silence; so “there wasn’t any liturgy or hymns to make my family feel uncomfortable”.

Both of them, he says, have been “on a journey”, trying to understand their relationship to their respective faiths, but they have always been supportive of each other’s beliefs.

CERTAINLY, he still considers himself a Jew. “I have faith, and, in terms of belief and outlook and attitude towards scripture, I would place myself in the Liberal Reform Jewish tradition I grew up in. I read the Bible, and, if I’m in a church service and the gospel is read, I remind myself that this is Jewish writing which is rooted in the Hebrew Bible, and particularly the Hebrew prophets.”

He clearly sees himself standing in the tradition of Isaiah, Amos, and Micah, and aspires to be “a prophetic Jewish voice” himself. Who he is married to, he says, is “really beside the point. Either what I’m saying is right, or it isn’t. Christians and Jews have got to talk about these things, and we’ve got to talk about them in an honest way.

“We Jews have got to acknowledge our culpability in what has happened to the Palestinian people, and that has to be the first step in trying to reach a just settlement.” 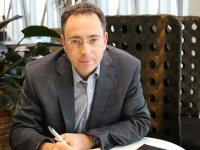