The U.S. evangelical community is in raptures over Trump's decision to declare Jerusalem the capital of Israel, believing it moves the world closer to Armagedon 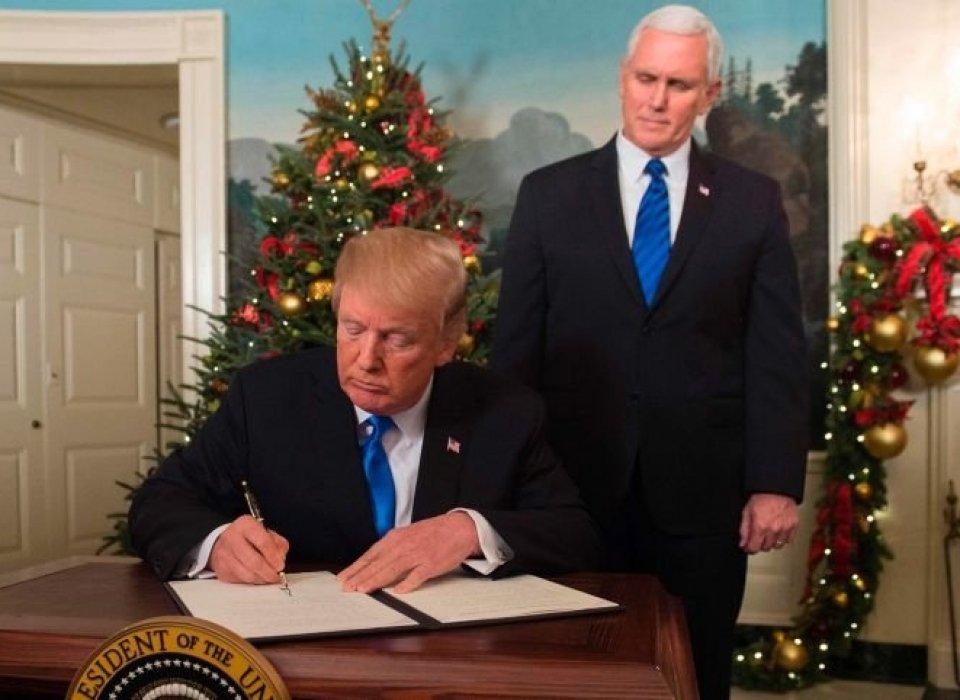 U.S. President Donald Trump signing a proclamation after delivering his statement on Jerusalem in the White House, Washington, on December 6, 2017, as Vice President Mike Pence looks on. AFP/Saul Loeb

Anyone wondering what the true impetus was behind U.S. President Donald Trump’s decision on Wednesday to unilaterally recognize Jerusalem as Israel’s capital needed only to view the image of the president when he made the formal announcement.

Glittering Christmas decorations festooned across the White House hallway enveloped Trump, with Vice President Mike Pence deliberately – if a bit awkwardly – placed directly behind the president’s shoulder, ensuring that no camera angle could leave him out of the picture.

It all felt carefully staged to send a strong message to Christian evangelical voters and their leaders that this is their victory and Trump is their man.

In evangelical world, President Trump has delivered time and time again. Now, with the moves regarding the embassy/Jerusalem he further cements himself as one who is on his way to going down as the most “evangelical friendly” president ever. @POTUS @realDonaldTrump @VP @CBNNews pic.twitter.com/n0jRnXgEM7

Trump showed he is behind the evangelical agenda not only when it comes to enacting domestic agenda – like opposing abortion, appointing conservative judges or saying “Merry Christmas” – but on foreign policy issues close to their heart as well.

It was surely no coincidence that the dramatic declaration took place in the final days of a crucial Senate special election campaign, taking place in Alabama next Tuesday, in which embattled Republican Roy Moore is fighting with the backing of former Trump adviser and Breitbart News Executive Chairman Steve Bannon. Getting religious, right-wing voters to the polls, despite the swirling controversy regarding Moore’s alleged past relationships with young girls, is viewed as crucial to a GOP victory.

The announcement also took place just before Pence is set to visit Israel for three days, from December 17-19. This guarantees enhanced media coverage for the Pence trip, where he will certainly be greeted as a conquering hero – pleasing evangelicals even more.

While much has been made of the influence of Jewish megadonor Sheldon Adelson in Trump’s move, and his Jewish son-in-law Jared Kushner’s words of support – flouting the conventional wisdom that he would be dismayed that it would derail his 11-month attempt to restart Israeli-Palestinian peace talks – the approbation from Israel and pro-Trump American Jews seems to be a happy bonus to the main objective.

Trump is showing love to Israel because evangelical voters form the crucial linchpin in his relatively small but solid support base. Evangelical voters threw their support behind Trump in 2016 at a higher rate than any previous presidential candidate – giving him 81 percent of their vote, even more than they gave to fellow evangelical George W. Bush.

It was these Christian evangelicals – and Pence, an evangelical himself and a prominent touchstone of their influence in the Trump administration – that were clearly the driving force behind the Jerusalem declaration.

Furthermore, the fact the evangelical community’s desire to see Jerusalem being irrevocably in Israeli hands is based on religious beliefs rather than practical political concerns means that a fear of the anticipated violent reaction from Palestinians and the Arab world was easily dismissed as irrelevant by Trump and the decision-makers around him.

This early Christmas gift to evangelicals was consistent with the Trump administration, which has been the most evangelical-friendly White House in U.S. history, with an unprecedented number of card-carrying members of the religious right filling cabinet positions. Indeed, a weekly Bible studies meeting is held, with Pence reportedly among those in attendance.

Also close to Trump: Jay Sekulow – one of the attorneys defending him in the Russia probe – a messianic Jew with a high profile in the Christian evangelical community.

And Johnnie Moore, considered the de facto leader of Trump’s evangelical advisers, told CNN that the status of Jerusalem has been a top priority for the community, and that the issue was “second only to concerns about the judiciary among the president’s core evangelical supporters.”

By making this move, Trump had “demonstrated to his evangelical supporters that he will do what he says he will do,” Moore added.

On Wednesday, the far-right Christian evangelical website Charisma News was overflowing with praise from evangelical leaders for the Jerusalem announcement.

“Evangelicals are ecstatic, for Israel is to us a sacred place and the Jewish people are our dearest friends,” Pastor Paula White told Charisma. “The Jewish people have dedicated themselves to Jerusalem over millennia, taken pride in it, defended it with blood and treasure, and today we rejoice with them.” 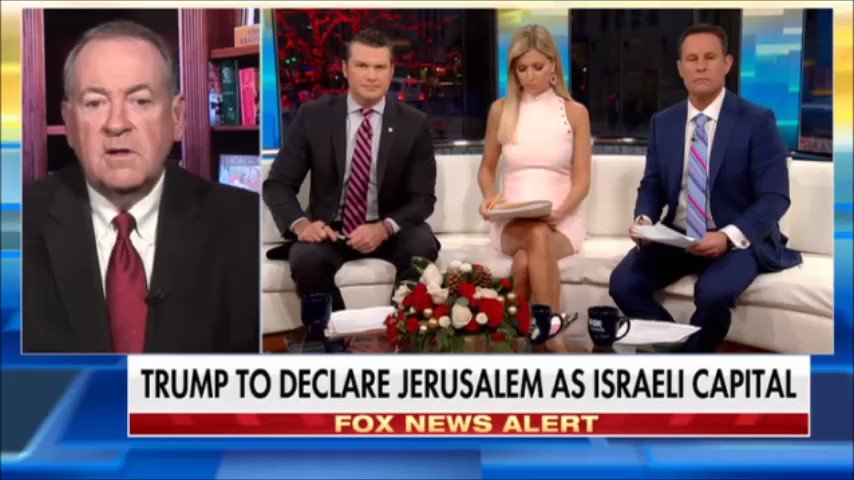 White delivered the invocation at Trump’s inauguration last January and participated in a high-profile “laying on of hands” during Trump’s presidential campaign, in which 40 evangelical leaders and televangelists prayed for his success.

Former Gov. Mike Huckabee, an evangelical leader (and father of Trump’s White House spokeswoman, Sarah Huckabee Sanders) has for years prominently lobbied for the U.S. Embassy to be moved to Jerusalem. He also hailed the move on Trump’s favorite television network, and dismissed concerns that it could spark violence.

In order to truly understand the centrality of this “theological dog-whistle” to Trump’s evangelical base, you must take their religious beliefs seriously, argued progressive Christian commentator and pundit Diana Butler Bass, in a widely circulated thread on Twitter. Bass said the Jerusalem issue was so important to evangelicals because it is necessary to regain Judeo-Christian control of the Temple Mount.

Much chatter on news and online about WHY Trump wants to recognize Jerusalem as Israel's capital.

This is vital, she explained, because rebuilding the Temple would initiate the “end-time” laid out in the Book of Revelation. End-time is a fundamentalist Christian belief in a prophecy that the living and the resurrected will one day be delivered from the Earth by God, their bodies transformed and protected in heaven, as he pours out his wrath on the sinners left behind.

Butler Bass asserted that “of all the possible theological dog-whistles to his evangelical base,” the Jerusalem declaration “is the biggest. Trump is reminding them that he is carrying out God’s will to these Last Days. They’ve been waiting for this, praying for this,” she wrote. “They want war in the Middle East. The Battle of Armageddon, at which time Jesus Christ will return to the Earth and vanquish all God’s enemies. For certain evangelicals, this is the climax of history. And Trump is taking them there. To the promised judgment, to their sure victory. The righteous will be ushered to heaven; the reprobate will be banished to hellfire.”

To these true believers, she added, the Jerusalem announcement “is the fulfillment of biblical prophecy. Donald Trump is not only acting on a campaign promise, but enacting a theological one. They believe that Donald Trump is God’s instrument to move us closer to the Rapture, the Judgment, and the End. Because to them that’s actually the beginning – the beginning of their reward and heavenly bliss.”

As a result, she explained, the issue of whether the Jerusalem move is a provocation that could harm the cause of peace is meaningless, since “peace in this world doesn’t matter.”

To nonbelievers, including mainstream Christians for whom this sounds far-fetched, she argued that it is actively preached in churches nationwide and that “millions of American Christians believe this and have based their faith and identity on it.”

Speaking on CBN News’ “Faith Nation” show, Hagee said that “Christians should care about Israel because the entirety of the Bible beginning at Genesis all the way to the end is God’s position paper on the Jewish people.

“Abraham, Isaac and Jacob, recorded in the book of Genesis, that He was going to give them a strip of real estate in the Middle East, and that piece of real estate would be theirs forever. Forever means today, tomorrow and forever,” he said.

He added a direct allusion to end-time, noting, “I believe at this point in time, Israel is God’s stopwatch for everything that happens to every nation, including America, from now until the Rapture of the church and beyond.”

The “Rapture of the church” describes an event that fundamentalist Christians believe will happen in end-time, referring to the “snatching away” of the righteous to heaven.

Given the wall-to-wall support for the Jerusalem declaration in the evangelical community, it is interesting to note that a recent survey of 2,000 American evangelical Christians found that older evangelicals offered far more unconditional support to Israel than millennials.

The survey, commissioned by the Chosen People Ministries, found that 80 percent of those over 65 believe the Jewish people have a right to the Land of Israel, compared with 61 percent of those under 35. It was issued with a dire warning that “overall support of evangelicals for Israel will drop significantly in the next decade if the younger generation is not educated now about its biblical importance.”

Maybe, but if the events of the past few days are an indication, evangelical Christian support of Jewish sovereignty in Israel is strong: Strong enough to move the hand of the president it helped put into office and whom the president needs to keep him there. 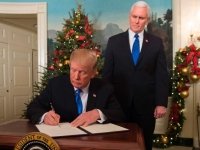