Palestine's liberation reverend: 'The world will take notice of our cause'

VANCOUVER - Eighty-one-year-old Palestinian Reverend Naim Ateek recalls when his family was displaced from their village of Beisan, now a northern Israeli town after it was destroyed in 1948, when he was just 11 years old. The memory of the Nakba (the catastrophe) is never far from his consciousness. 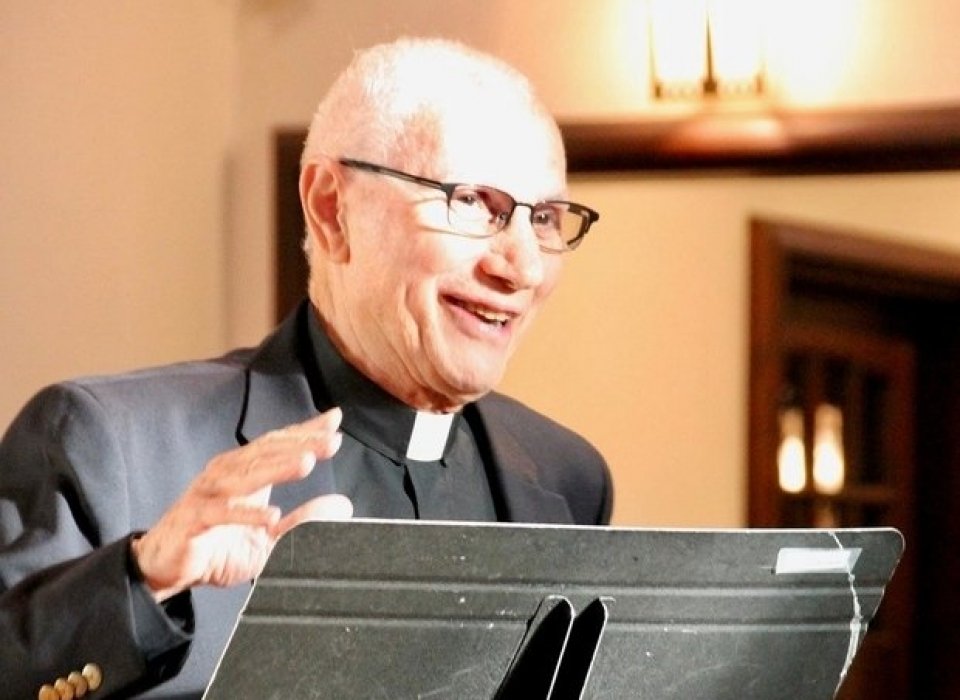 “I remember my father,” he recalls of the family patriarch of 10 children, “a successful goldsmith, pleading with the militias, saying ‘we are a big family and we have nowhere to go’,” but it was to no avail.

The villagers were divided between Muslims and Christians, with the former sent to Jordan, and the latter taken by bus and “dumped on the outskirts of Nazareth [the city now in present-day Israel where Jesus is thought to have been raised],” Reverend Ateek tells Middle East Eye in an interview during his cross-Canada book tour.

Reverend Ateek, the co-founder of the Jerusalem-based Palestinian Christian organisation Sabeel Ecumenical Liberation Theology Centre, says that he knew about his “calling” to be an Anglican priest ever since childhood. He became canon at St George’s Cathedral in Jerusalem in 1985, just two years before the first Intifada (uprising) kicked off.

“We need a new non-violent intifada,” says Reverend Ateek, a key player in the development of Palestinian liberation theology. It was in meetings after Sunday services with his congregation and discussions about reconciling their Christian faith with the realities of the Israeli occupation, that he developed his unique Palestinian take on liberation theology, a movement which originally began in Latin America in the late 1960s and 1970s, in response to poverty and oppression.

While liberation theology in Latin America was mainly about battling poverty, he explains, and in South Africa it was about ending apartheid, it is always about non-violent solutions.

“In our situation, it has to do with the Nakba and with the ‘67 occupation. But everywhere, liberation theology is about ending oppression and seeking out just, non-violent solutions.”

Reverend Ateek left his homeland and joined his daughter Nevart in Dallas, Texas, two years ago. “But my heart,” he says, “is always in Palestine,” which he visits regularly using his Israeli passport.

In spite of his personal hardships, Reverend Ateek’s message and the theme in his new book is about rejecting violence, promoting justice, and encouraging forgiveness and reconciliation.

On the sidelines of his book tour in Canada, the father of three speaks of young people taking part in the Great Return March protests in Gaza, calling for Palestinian refugees' right to return to their former homes now inside Israel. “Their movement needs to spread throughout Palestine and also to Palestinian citizens of Israel,” he told MEE.

“I believe that this protest movement needs to continue non-violently. What’s happening in Gaza needs to happen in the West Bank and in Jerusalem," says the veteran activist.

But Reverend Ateek, a man whose slight stature and grandfatherly demeanour belie an incredible determination and commitment to the liberation of his people, is not naïve about the possible consequences of such actions.

“If this started in Jerusalem,” where he says the Israeli government is trying to “empty the Palestinian presence, the IDF (Israel Defence Forces) would kill protesters immediately”.

“We should not try to kill back in revenge,” he says, as violence only serves to “discredit” the Palestinian cause, and is a “losing battle” against the military power of the Israeli state.

The non-violent struggle, he contends, is a powerful communication tool.

“People’s eyes need to be opened to the reality of occupation,” he says. “Unfortunately what’s happening in Gaza is hidden from major media in the US – but thank God for the internet.” When asked whether the sacrifice of protesters for their cause is too heavy a price to pay, he says sanguinely: “We are getting killed anyway. Almost every Friday people protest after noon prayers across Palestine and are attacked by the IDF.”

Still, Reverend Ateek says, “I’d rather see that than a knife attack against a soldier by a frustrated young person.”

Citing the work of Martin Luther King – an influence on Melkite Archbishop Joseph Raya, one of the pioneers of Palestinian Liberation Theology who worked with Doctor King for many years - and his famous quote “the arc of history bends towards justice,” Reverend Ateek says there is a cost to non-violence.

“We need to accept the cost of non-violence. It will yield rewards and it’s the right thing to do. The world will take notice of our cause.”

While Reverend Ateek sees progress already being made in Europe, his new book addresses the heartland of America, whose billions fund the occupation of his homeland, and in particular, the Christian Zionists who he says support President Donald Trump and offer unquestioning support for Israel.

The United States has been giving Israel $38 billion in a 10-year military assistance package signed off by President Obama in 2016, the largest such aid package in US history, and there have been calls by some US senators to increase it.

A Palestinian Theology of Liberation sets out to prove that the fundamentalist interpretation of the Old Testament that serves to justify ongoing occupation is an incorrect reading of the Bible.

In his book, Reverend Ateek contends that after the 1967 Six-Day-War, the surge of religious Zionism - and a concurrent shift to the right in Israeli politics - made the Bible a more effective tool for justifying illegal settlement expansion.

Yet this was not only the case among Jewish Zionists, but also among Christian Zionists – whose odd alliance with the former belies the fundamental differences in their belief systems.

As the Jewish settler movement grew exponentially in Israel, Reverend Ateek explains in his book, so did the right-wing evangelical movement in North America, and their unwavering support for Israel, especially in the past decade as they began funding Jewish immigration to Israel.

Reverend Ateek contends that the post-1967 war trend in Israel to make Jerusalem exclusively Jewish is not historically accurate, writing that the “land promise” found in the Bible (which states “I will give to you and to your offspring after you the land of your sojournings, all the land of Canaan, for an everlasting possession, and I will be their God,” Genesis 17:8) is actually a “theological anachronism,” and that the city has always been deeply multicultural.

Reverend Ateek commends the work of Rabbis for Human Rights, who use their faith as a basis for defending Palestinian rights, but says the way that religious settlers and Christian Zionists interpret the Bible “is unacceptable today".

“They have to wake up to the fact that God is a god of justice, peace and truth. They have taken selective verses and interpreted them in a way that is exclusive. But my message is that God is an inclusive God who treats all people equally.”

Reverend Ateek states rather optimistically that “the movement of history is with international law – not military might or tribalism,” but sadly notes that a racist and exclusionary theology persists. The “challenge of faith” he maintains, is to “reject exclusion and embrace inclusivity”.

While he says that “most people in the world today who want a just peace for all the peoples of the land” are either in favour of a two-state or one-state solution, “Israel wants neither.”

“I hope we will never accept any Israeli option that is not based on international law and UN resolutions,” he affirms.

In response to the tired old line often espoused in the West about waiting for a Palestinian “Gandhi,” Reverend Ateek doesn’t miss a beat.

While he agrees that new Palestinian leadership is necessary, “Israel has killed many good Palestinians who could have been Gandhis,” he relates.

“There are people today in Israeli prisons, like Marwan Barghouti, one of the main leaders of the Second Intifada - who was jailed in 2002 – who could have played a role in the peace process. Israel is looking for someone who will adopt their methods and if they don’t accept, they will be assassinated or sidelined.”

Christians in Palestine and brethren abroad

Yet as Palestine’s beleaguered Christian community continues to bleed into exile, reverend Ateek also criticises the church and its often non-Palestinian hierarchy for its inaction on social justice issues facing his people. Most Palestinian Christians live in the West Bank, namely Bethlehem, and follow the Greek Orthodox church and other eastern denominations.

His new book traces the fascinating history of Christians in Palestine. According to Reverend Ateek, when Michel Sabah was ordained the first Roman Catholic Palestinian Archbishop in 1987 - and the first non-Italian in five centuries - and when Reverend Ateek was a canon at St George’s Cathedral in Jerusalem, there was a greater spirit of activism.

But the often fragmented Christian community in Palestine, he says, who have “been there for 2000 years under all kinds of governors and rulers and occupiers,” can be reunited through a national movement of non-violent resistance.

As for Christian brethren in the West, Reverend Ateek says more of them need to speak up.

“We need courageous people who are willing to stand up and look Zionists in the eye and say: ‘I am not anti-Semitic. What Israel is doing is wrong and unjust.’ That’s the kind of clear, non-violent confrontation we need.” 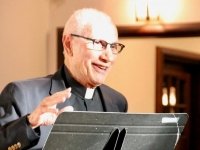