Opinion // It's Not About Flags: The Real Problem With Jewish-Palestinian Dialogue

Palestinian children living in Greece stand next to a placard reading 'Jerusalem our's since ever for ever'. Thessaloniki, July 25, 2017 SAKIS MITROLIDIS/AFP

Washington State’s Camp Solomon Schechter didn’t know it was about to start a bitter debate across the Jewish world when it raised a Palestinian flag over their grounds last month. The independent camp wound up apologizing for attempting what they called a "teachable moment", and ultimately took down their Facebook page after it was deluged with criticism - and some praise.

But the issue worth discussing here isn’t whether, as some of their critics claimed, the camp’s leadership betrayed Israel or if, as some on the left argued, those who opposed the flag raising are bigots who oppose peace.

Rather, it is whether most of what passes for interfaith or Jewish-Arab dialogue is something that can produce progress toward peace or is, instead, merely another proof of author Cynthia Ozick’s axiom, that "universalism is the parochialism of the Jews."

The flag was a gesture of welcome for a visiting group affiliated with Kids4Peace, an organization that brings together children from disparate groups to build relationships. The sojourn of the 13 Jewish, Muslim and Christian children at the camp apparently went off without incident.

But once the flag-raising became known, the camp apologized and acknowledged the "sadness and anger" it provoked. The camp was at pains to assert that their institution was “unabashedly pro-Israel.” They also said the Palestinian banner was a demonstration of "empathy," not backing for the actions of the Palestinian Authority or a direct political statement, even if the apology seemed to cast it as a vague expression of support for a two-state solution.

The incident was a Rorschach test in which those on the right vented outrage about betrayal and the left defended compassion. Yet the real point of interest here is not the undoubted good intentions of those responsible or how tremendous the power that symbols like flags still have to engender passion.

Rather, it is the blind faith that so many Jews have in the value of dialogue programs.

In principle, the idea is unexceptional. Getting people from warring groups to know each other as individuals rather than symbols of fear and loathing can only help undermine stereotypes that fuel conflict.

But there is more to that lofty goal than merely throwing children or adults together. Since the impetus for dialogue between Arabs and Jews almost always comes from the latter, they tend to follow a familiar pattern: Arabs denounce Israeli oppression and the Jews nod in sympathetic agreement or fail to answer in kind about the actions of the Palestinians.

That’s because supporters of the peace process and concessions to the Palestinians are usually the ones organizing and taking part in such efforts, not skeptics or opponents of a two-state solution.

But, as a journalist who has covered dialogue programs for decades, what has always been clear - though usually not to the organizers - is the lack of symmetry between the two sides.

Few if any Palestinian participants ever express doubt about the justice of their cause or feel obligated to temper their anger at what they consider to be the sins of Zionism. But even supporters of Israel who engage in these programs generally feel compelled to express criticisms of Israel or to show respect if not sympathy for the Palestinian Nakba narrative.

That isn’t the sort of dialogue that can help bridge the divide between the two peoples, let alone promote peace.
True dialogue involves airing disagreement and promoting respect for differing narratives, not one side affirming the stance of the other. Kids4Peace and similar groups speak of the need to introduce Jews to pro-peace Palestinians. But the problem is that there is no comparable force in Palestinian politics to Peace Now, or J Street.

The Jewish left may say that is understandable given the relative strength of the two sides. Yet there is no sizable Arab constituency criticizing Fatah or Hamas for not working hard enough to compromise as is there is among Jews attacking the Israeli government. One doesn’t have to be an opponent of peace or have no respect or universal values to understand that Kids4Peace or anything like it is unlikely to change that.
Camps can fly any flag they want but so long as that is true, such dialogues will not only do minimal good, but instead will reinforce a dynamic that does little to promote support for compromise on both sides.

Jonathan S. Tobin is opinion editor of JNS.org and a Contributing Writer for National Review. Follow him on Twitter at: @jonathans_tobin 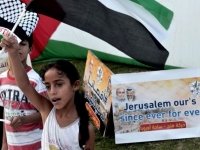